Over the last 3 years, the number of universities offering courses on Adizes theory has increased significantly. I am privileged to have worked with Dr. Adizes while he was still at UCLA and as he established his internationally acclaimed Adizes Institute. He became a valuable resource to business educators in California and continued to grow his consulting and training organizations in Europe and other developing nations. The BA Business School in Riga, Latvia, ISM in Kaunas Lithuania, the Euromed Management school in Marseille, France, the International Academy of Business, Almaty, Kazakhstan, the Riga Technical University in Riga, Latvia, the School of Economics and Business in Sarajevo, Bosnia, the Francisco Gavidia University and the Dr. Jose Matias Delgado University both in San Salvador, El Salvador, TEC de Monterrey in Monterrey Mexico, IPM Business School in Minsk, Belarus, KMBS, KNEU and The European University all in Kiev, Ukraine, The University of Tulsa in the United States, Voronezh State University, Volgograd State University, MSI, MIRBIS, High school of economic, Peoples' Friendship University of Russia, MABIU in Russia and many other Universities have all offered courses on Adizes.

About 15 years ago he and his wife Nurit became even more active in the Young President's Organization of which I am a life time member. I also got a chance to know them as we are practically neighbors here in Santa Barbara and became an adviser to his organization. I am a firm believer in his philosophies or organizational life cycles and have enjoyed sitting in on a number of international groups he has trained here at his world HQ in Santa Barbara, California.


I just received a notice that they are proud to announce that in addition to the many distinguished universities listed above, as well as the Adizes Graduate School founded by Dr. Adizes, Adizes theory will now be offered in the IE Business School in Madrid Spain. IE Business School has consistently been ranked as one of the top business universities in the world. The Executive MBA program was ranked 1st worldwide by The Economist in 2010, 4th worldwide by America Economia in 2011, and 1st in Europe by The Wall Street Journal in 2010.


"We at the Adizes Institute are excited at the prospect of exposing students at this top ranked institution to Adizes" the executive administrator Paula Lemon told me today. Adizes Institute is a worldwide consulting organization serving clients who are involved in many diverse industries, ranging in size from start-ups to members of the Global 100.


At the heart of the organization is the Institute where research, licensing and training in the Adizes Methodology is conducted. In 2011, Leadership Excellence ranked Adizes Institute among the top ten organizations for leadership development. The Institute is also associated with the Adizes Graduate School, which offers master and doctoral degree programs in organizational transformation. Dr. Ichak Kalderon Adizes, Ph.D. is the founder of Adizes and the creator of the proprietary methodology for managing change. Since 1973, Adizes has been changing the way management is taught and practiced around the world. www.adizes.com
Posted by Patty DeDominic at 1:22 PM No comments:

Find Your "Yodas" and Build Your Networks 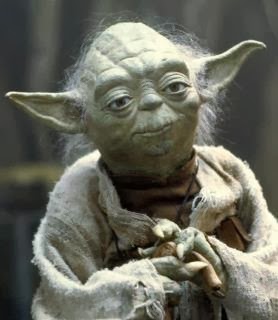 No, that's not a picture of me, Patty DeDominic, a.k.a. the Santa Barbara business mentor!  I am, however, smiling as I see this and am grateful for the folks who affectionately call me the "accidental Yoda" and their business coach.  I love working with high-achieving professionals in politics, education, law enforcement, medicine and business. Entrepreneurs are a hoot and I love them, too!

So, no, I don't think I am Yoda...and hopefully I look a little better.  But looks are not what this short post today is all about. This post is about two keys to success for people in business.

I want to share two key business pointers for those who are navigating their professional paths.

Yes, you pick them!

Good mentors will often find you and you will notice that they take an interest in your accomplishments and offer encouragement on your trials and tribulations. Some will give you unsolicited advice and support you during critical changes in your life and career.  Otherwise, mentors can be situation specific and may or may not offer advice unless you ask them for it.

Situation-specific mentors include insiders at a company you are researching and hoping to land a job or big contract with. Others would include the wise counselor at school who encourages your extracurricular activities, internships or major in college.

Reach out and ask people for help. You are actually doing them a favor if you share a bit of your professional journey, some of your challenges, and ask for help. It feels good to help awesome people and if you are reading this far, you must be awesome or have some awesome potential!

One thing you can take to the bank is this: All successful people have mentors. Formal or informal, no one exists without the support of other people. Business and professional leaders know how to ask for help and how to give feedback to their advisers and mentors. The best pros in sports, education and even business have coaches. Get some for yourself, and get better every year at picking and upgrading your mentors and coaches.

Yes, you will outgrow many of your mentors....just be sure to pick mentors who have walked your path and (preferably) have won awards for excellence and service in your area of interest.

Don't be afraid to also give your mentors feedback. In some cases it is the best way you can repay your mentors! Your success can be truly inspiring to others and often more so to the people who have invested time in you.


Your Network is YOUR NET WORTH Potential

Who do you associate with?  Research in major universities (www.rutgers.edu) extols the value of your network, particularly your alumni association and colleagues from all of your previous employment-- even the internships and first jobs you took right out of school.

Choose your colleagues and friends with some strategy in mind.  I'm not arguing against spontaneity and emotional support and instinct here. DeDominic philosophy encourages you to use your GUT often and combine that with logic and consciousness.   I am telling you now that I truly believe that  your Network does impact your Net Worth and YOU CAN control it more than you might think.

Some scholars and business leaders feel that they only have time for a small handful of close friends. If this is you, then make sure you add some wise mentors with lots of accomplishments to your friends circle. Make your friendships count and choose people who have values as high or higher than your own. I suggest that you look for those who have experienced higher earnings than average in their chosen field. The market pays "a fair rate"and does't sustain over-payments indefinitely. So if you want to make more money or have more control of things, one important way to do that is to up your own cash flow. You will not learn how to do that from internet strangers selling "get rich quick" schemes. You learn to increase your earnings by smart investments in time and resources and by mentors willing to help you avoid some of their mistakes.

No one in business is super successful all the time, but super achievers learn to take calculated risks and they build networks of people who they can help and who can turn around and help them.

Here's to your success!

Posted by Patty DeDominic at 12:24 PM No comments:

Key Words in your Resume, by Nita Busby


Patty DeDominic says that resumes are your passport to finding your next job and to professionally representing yourself. Resumes don't make or break your career, rather they can serve as a screen
IN OR OUT tool.  Since you want your resume to speak well for you, and not be used to screen you out, it pays to provide a professionally written resume and to use key words.


Read below what expert resume writer
Nita Busby has to say about Key Words Value.

Key words in a resume and or cover letter lead to successful hiring procedures as judged by the applicant and the corporation’s hiring authority. The documents are received by a company interested in hiring someone for a particular position. The company receives resumes by holding job fairs, by email or regular advertising job opening or through some sort of networking system. The job seeker knows he/she needs to get his/her resume, often with a cover letter, attached, to the hiring authority. Once the resume is received, these days, it is posted into a corporate PC database categorized by specific job openings. When a sufficient number of resumes have been posted in the data base, a key word search is conducted. Resumes with noted key words are printed out and used by the hiring administration to contact that job seeker for an interview. See how simple this process is these days to choose applicants?

More Info available on this topic on www.resumesetc.net

Finding a job right after college is hard enough for graduates these days. Finding a dream job three months after college is nearly impossible. But for Logan Frye, one of my clients who graduated from University of Michigan in May 2012, he is already flourishing at his job working with a marketing research firm in New York City. Click on the link below to listen to our conversation and Logan's advice for college graduates!

If you'd like to purchase a copy of my book for college graduates, "Get It!", click on the link below:

Purchase "Get It!" on Amazon.com now!
Posted by Patty DeDominic at 4:08 PM No comments: